Aravindha Sametha all set to become NTR’s highest grosser in US
Published on Oct 14, 2018 9:14 am IST 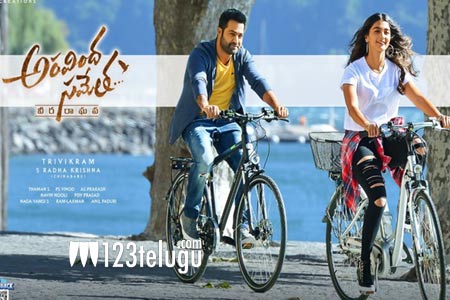 Aravindha Sametha is continuing its dream run at the box-offices in the twin Telugu states and overseas. In the US in particular, the film has already become the third highest grossing film in NTR’s career, after Nannaku Prematho ($2.03M) and Janatha Garage ($1.81M).

On Saturday, until 11 PM EST, Aravindha Sametha breached the $1.5M milestone by collecting $320,485 from 177 reported locations. The film’s latest gross is $1,608,977. With a couple of hours and several more locations yet to be reported, Saturday’s gross is expected to be around $350K.

Aravindha Sametha is expected to beat Nannaku Prematho’s lifetime gross by tonight or on Sunday, becoming NTR’s all-time highest grosser in the US. Stay tuned for more regular updates on the film’s box-office collections.