Arjun Reddy’s controversial kissing posters to be rolled back
Published on Aug 23, 2017 2:03 am IST 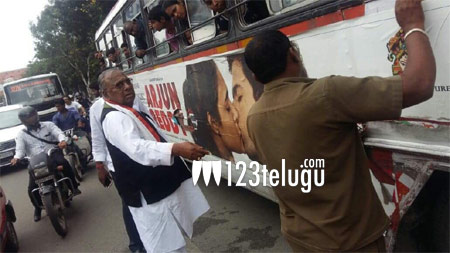 The makers of Arjun Reddy kick-started the film’s promotional blitzkrieg with a workshop video which had the film’s leading pair Vijay Deverakonda and Shalini practicing a kissing scene. Then came the first look poster, the teaser, video songs and the trailer, which too had Vijay and Shalini kissing.

While promoting the film over the past few weeks, Arjun Reddy’s makers filled up every nook and corner of the twin Telugu states with these kissing posters, which raked up a huge controversy. After the senior Congress leader VHR tearing down the poster from an RTC bus, a woman’s organization filed a police complaint against Arjun Reddy’s makers for the ‘obscenity’ in the posters.

Respecting their sentiments, Arjun Reddy’s makers finally announced that they will roll back the controversial kissing posters from all the areas in Andhra Pradesh and Telangana. Arjun Reddy is releasing this Friday.