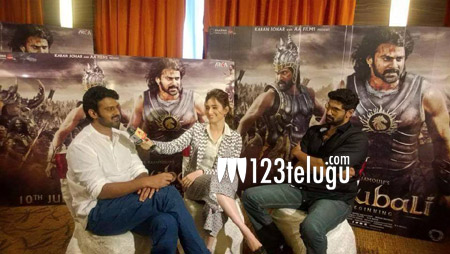 As the trailer of the film’s Tamil version will be launched this evening, here’s an interesting snippet about India’s biggest motion picture, Baahubali. Baahubali becomes the first ever true Telugu-Tamil bilingual produced by a Telugu film production house.

Earlier, even though several films hit the screens in the name of a bilingual, none of them was 100 per cent bilingual with most of the scenes retained from the Tamil version with Telugu lip-sync. Whereas in Baahubali, each dialogue was spoken twice by the actors in Telugu and Tamil simultaneously.

Tamil star Suriya will be the chief guest at the trailer launch in Chennai this evening. The film’s Tamil theatrical rights were grabbed by UV Creations and Studio Green.