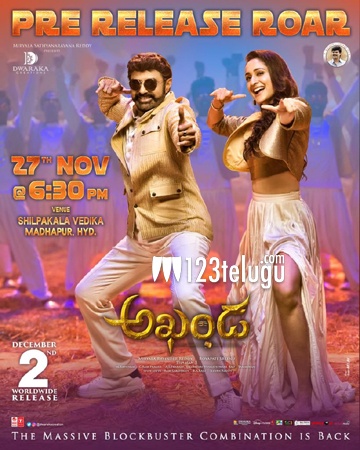 The pre-release event of hero Balakrishna and director Boyapati Srinu’s much-awaited hat-trick film, Akhanda, will be held on November 27. The event will be graced by several popular celebrities and it will take place at Tollywood’s most preferred venue, Shilpakala Vedika, which has been lying low for the last couple of years due to the pandemic.

Akhanda is gearing up for its theatrical release on December 2. The film’s power-packed trailer was launched last week and it received a thunderous response from fans. Balayya’s fiery avatar in dual roles will be a major highlight of this high budget action drama.

Srikanth, Jagapathi Babu, Pragya Jaiswal and Poorna will be seen in crucial lead roles. Miryala Ravinder Reddy has produced the movie for which Thaman has composed the film score.