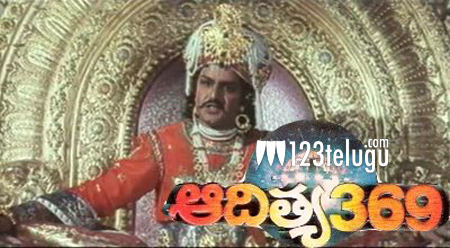 Film star Nandamuri Balakrishna is currently shooting for his most awaited 100th project, Gautamiputra Satakarni. Out of his 100 films, his 1991 sci-fi entertainer, Aditya 369, will easily make it to the top 10 of Balayya’s career best films.

Released on July 18, 1991, this iconic film will be celebrating its silver jubilee tomorrow. Inspired by the Hollywood cult classic Back To The Future by Robert Zemeckis and HG Wells’ novel Time Machine, Aditya 369 was directed by the legendary Singeetam Srinivasa Rao and produced by Sivalenka Krishnaprasad, who recently made his comeback to film production with Nani’s Gentleman.

Made with a whopping budget of 1 crore 52 lakhs and shot over 110 days, the film feature renowned technicians like Ilayaraja, PC Sreeram and Peketi Ranga etc. Incidentally, Balayya wanted Aditya 369’s sequel to be his 100th film. The sequel will be made soon.