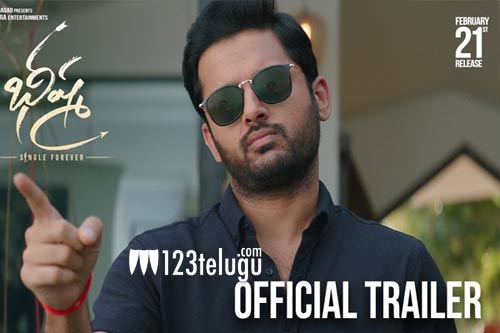 The theatrical trailer for Nithiin and Rashmika Mandanna’s soon-to-release romantic entertainer, Bheeshma, has been launched just a while ago. The trailer showcases Nithiin in two shades – a lover boy in the romance track, also featuring Rashmika, and as an angry young man who takes on a corporate giant.

Bheeshma’s trailer starts off with Nithiin’s funny and desperate attempts to fall in love with several girls only to end up with a series of heart breaks. He later collides with a greedy corporate Czar (Bengali star Jisshu Sengupta) who plans to grow agricultural crops using some hazardous chemicals that result in early harvest and more profits. The main story is all about how Nithiin saves Bheeshma Organics.

This Venky Kudumula directorial is a complete package of entertainment and action. Naga Vamsi has bankrolled the film and PDV Prasad has presented it. Bheeshma is hitting screens on February 21.