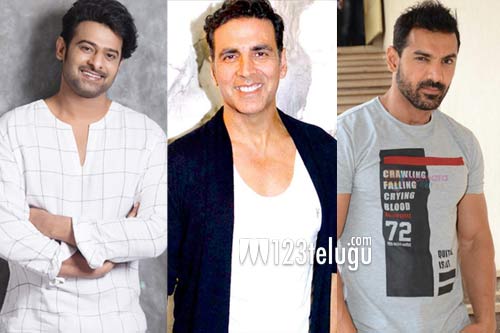 With his upcoming action thriller, Saaho, Prabhas is going to reiterate his popularity among his fans across the country. Just like his Telugu fans, Prabhas’ North Indian fans are eagerly waiting for Saaho’s release. The film is slated to hit screens on August 15, to cash in on the Independence Day weekend.

Saaho is going to release along with Bollywood star Akshay Kumar’s Mission Mangal and John Abraham’s Batla House. While Mission Mangal is a niche film based on ISRO’s Mars Orbiter Mission, Batla House is an action thriller based on Mumbai Police encounters.

However, despite the heavy competition, Bollywood trade analysts are predicting that Saaho will get more number of screens than Mission Mangal and Batla House and it’ll easily surpass both the movies’ collections at the box-office. The humongous buzz for the film, Prabhas’ craze after Baahubali’s historic success and the solid teaser and making videos have raised expectations among fans and trade circles. If Saaho manages to get positive reviews on its opening day, then sky will be the limit for its box-office collections.