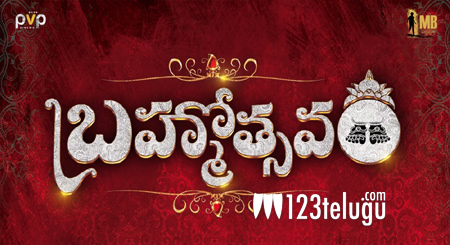 One of the most eagerly awaited films of this summer, Mahesh Babu’s Brahmotsavam, is fast nearing the completion of its shooting part. The film is currently in the last leg of its production and the entire shooting will be wrapped up in April.

As per the latest update, Brahmotsavam’s audio album is expected to be unveiled on the 24th of April in the temple town, Tirupati. The audio launch event will be a complete traditional affair. Apparently, Mickey J Meyer has scored some really cool melodies in his trademark style.

Being made as a Telugu-Tamil bilingual, Brahmotsavam will hit the screens in the third week of May, although an official announcement is awaited in this regard. Sreekanth Addala is helming this high budget family entertainer and PVP Cinema is producing it. Kajal, Samantha and Pranitha are the film’s leading ladies.