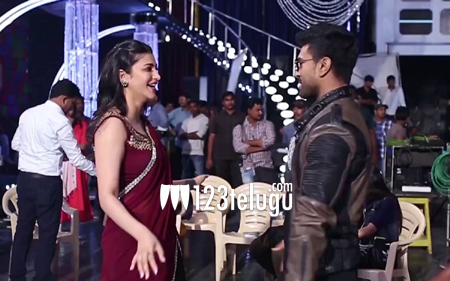 Even though the makers of Ram Charan’s ongoing action thriller, Dhruva, decided to not organize a grand audio release event, the buzz around the film is intensifying with each passing day, thanks to the presence of several top Tollywood celebrities on the sets of Neethone song shoot.

Stars like Megastar Chiranjeevi, Allu Arjun, Shruti Haasan, Upasana Kamineni, Akhil, VV Vinayak, Koratala Siva and Sukumar etc paid a visit to the movie’s unit during the song shoot. A making video featuring all these stars has been released and it is creating quite a buzz among the fans.

Being directed by Surender Reddy, Dhruva is produced by Allu Aravind. Rakul Preet Singh is the film’s leading lady. Dhruva will be released in the first week of December.