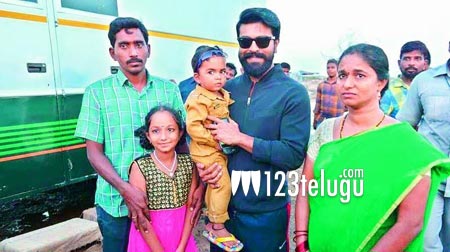 Film stars helping out their fans and common people in need is nothing new. Mega Powerstar Ram Charan too has done his bit to the society on several occasions. Charan’s latest gesture has reportedly helped a little boy recuperate from a serious kidney-related ailment.

Apparently, the parents of a 3-year-old boy named Dhanush first met Ram Charan during Rangasthalam’s first schedule in Rajahmundry. They had informed Charan about their son’s health condition and Charan immediately instructed his team to arrange medical treatment for the boy.

Charan paid for Dhanush’s treatment at a private hospital in Hyderabad. The little boy recuperated and visited Charan on Rangasthalam’s sets on Saturday. While Charan was happy to know about his health, he was pleasantly surprised when Dhanush planted a kiss on Charan’s cheek as a thank you gesture.