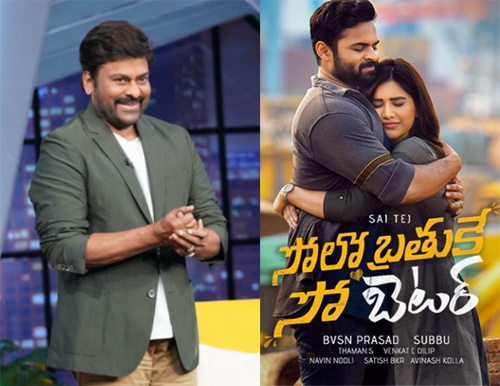 Young stars Sai Dharam Tej and Nabha Natesh’s youthful romantic entertainer, Solo Brathuke So Better, is all set to open in cinemas on December 25, as a Christmas special treat. The film is Tollywood’s first major release after the theaters reopened. Naturally, fans and the film fraternity have pinned high hopes on the film’s success at the box-office.

And SBSB has just received a big boost from none other than Megastar Chiranjeevi. The senior hero took to Twitter and wished the film’s team ahead of the release and hoped that the film’s success will rejuvenate the spirit of the film industry. Chiru also had an important message for the audience. He urged the movie lovers to wear masks and maintain social distancing while they enjoy the movie.

Directed by debutant Subbu, SBSB has been bankrolled by veteran producer BVSN Prasad. The film has its music composed by Thaman.