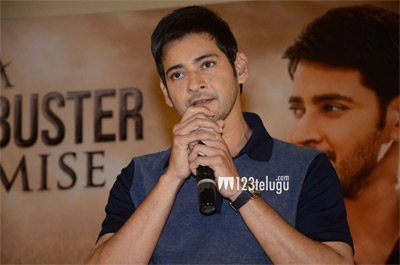 The core team of Superstar Mahesh Babu’s latest hit, Bharat Ane Nenu, met with the media this evening and shared their happiness over the film’s success. Here are the excerpts from Mahesh’s interaction with the media personnel:

Q) You had adopted villages after Srimanthudu’s success. Will you take up people’s issues now that BAN has become a hit?

A) I have been doing my bit already and I don’t like to make it public. But I am so proud of this film. I will proudly show this film even to my grandchildren in the future.

Q) How much credit do you give to your father for BAN’s success? Many felt your voice in the First Oath was exactly like your dad.

A) Not just this film, I owe my entire life to my father.

Q) Giving superhits is nothing new to you. How special is BAN’s success?

A) Very special. I was going through a very low phase for the last couple of years. I was not able to meet audiences’ expectations. I am quite happy with BAN’s success.

Q) A few directors who gave you blockbusters on your first collaborations went on to give you flops with the successive films. You have finally broken that jinx with Koratala Siva. How do you feel?

A) That’s true. But Siva garu and I will never give flops. We will continue to give more hits in the future.

Q) Did your mother watch the movie? What was her reaction?

A) I was feeling very tense a couple of days before the film’s release. My hands were literally shaking. It was then that I went to meet my mother and had coffee with her. I felt relieved after seeing her.

Q) What was your dad’s reaction after watching BAN?

A) When he first listened to the First Oath audio teaser, he said, “Acham mana voice lane undi.” He loved the movie immensely. Nothing is more important for me than the happiness I see on his face.

Q) What did your brother say after watching the film?

A) He was brought up in Chennai and he’s a big fan of MGR and Sivaji Ganesan. He said that the film reminded him of those stalwarts.