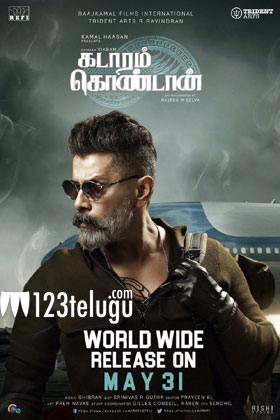 Since last year, fans of Tamil star Chiyaan Vikram have been eagerly waiting for the release of the actor’s upcoming action thriller, Kadaram Kondan. As per the latest updates, the film is slated to open in cinemas on May 31. Stalwart Tamil star Kamal Haasan is producing this high budget entertainer.

The promotional stills revealing Vikram’s stunning look, where he sported a thick, salt and pepper beard went viral among the actor’s fans a couple months ago. Vikram has also crooned a special number in the movie. Kamal’s daughter Akshara Haasan is the leading lady in Kadaram Kondan. Cheekati Raajyam’s director Rajesh M Selva has directed the movie. The film will have a simultaneous release in Telugu.