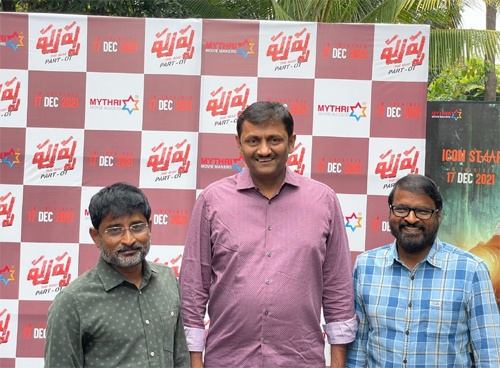 Addressing the media, the makers of Pushpa have announced that the action entertainer will release in 5 languages on more than 3000 screens across the nation. Among them, around 1000 screens are locked for the Telugu version.

The producers, who are confident about the film’s success, denied the rumors and confirmed that there will be no chief guests for the pre-release event of the film, which is scheduled to happen on 12th December.

The shooting of the second part of Pushpa will commence in February 2002, stated the makers.

Speaking about their upcoming films, Mythri Movie Makers have announced that a new film with Nandamuri Balakrishna will begin in January.

They also mentioned that the shootings of their upcoming projects, Chiranjeevi’s movie, Mahesh Babu’s Sarkaru Vaari Paata, Kalyan Ram’s next, and Nani’s Ante Sundaraniki are currently on floors.