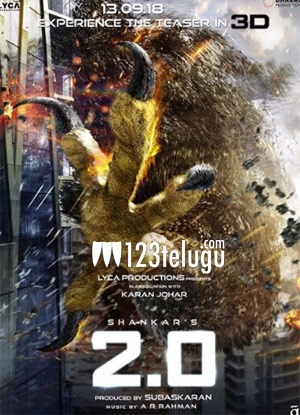 123telugu were the first ones to reveal that the teaser of 2.0 would be out on the 13th of this month. Today, an interesting poster of the film featuring some spectacular effects was out all over the social media and has raised the expectations on the teaser.

A massive function is being planned to release the teaser and Shankar is busy looking after the arrangements himself. A R Rahman scores music for this film which has Amy Jackson as the female lead.

The teaser will release in the 3D format in Hindi, Telugu, and Tamil simultaneously. Akshay Kumar plays the main villain in this film which has Rajnikanth as the main lead.