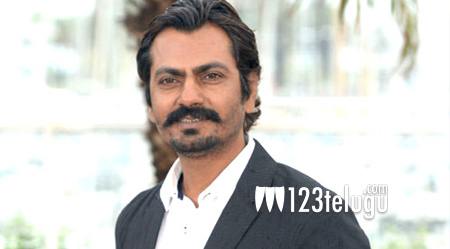 Bollywood star Nawazuddin Siddiqui is hailed as one of the finest actors in the country today. Nawaz is acclaimed for his performances in cult Hindi thrillers such as Gangs of Wasseypur, Badlapur and Raman Raghav 2.0 etc. Nawaz was in Hyderabad recently to promote his soon to be released Hindi flick, Babumoshai Bandookbaaz.

Interacting with the local media during his Hyderabad visit, Nawaz expressed his interest in exploring a career in Tollywood. “Great films are made in the Telugu film industry, and if I am offered a good script, I will definitely lap it up,” Nawaz said. It may be remembered that Nawaz hailed Baahubali The Conclusion and admired Prabhas’ performance in the film.

Until recently, there were reports that Nawaz is being considered for the main lead in Telangana Chief Minister KCR’s biopic. However, there has been no official announcement about the same.