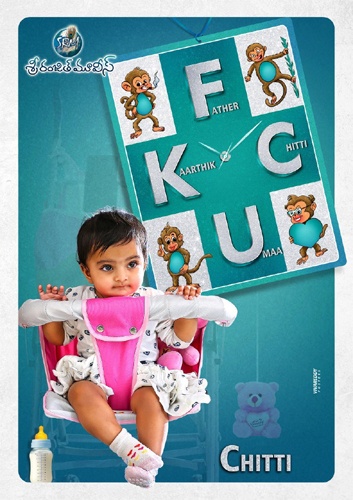 So far, we have seen filmmakers releasing the first look posters of star heroes and heroines and even star character artistes. But in a rare feat, the makers of Jagapathi Babu’s upcoming family entertainer, Father, Chitti, Uma, Karthik (FCUK), have unveiled a cute first look poster of a baby girl named Sahashritha. Of course, the little cutie plays the important role of Chitti in FCUK.

FCUK’s makers claim that Sahashritha’s Chitti character will be a game-changer in the movie. However, the mystery behind this ambitious claim has been kept a secret. Young hero Ram Karthik and Tamil actress Ammu Abhirami will be seen as Karthik and Uma respectively, while Jaggu Bhai plays the father.

Vidyasagar Raju has directed the film and Damu is bankrolling it under Sri Ranjit Movies banner. The film’s shooting has been completed and the post-production work is underway at the moment.