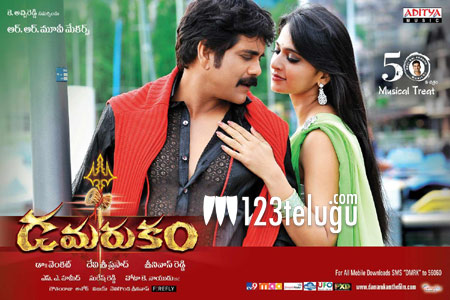 ‘King’ Akkineni Nagarjuna’s big budget socio fantasy drama ‘Damarukam’ is gearing up to hit the screens for Dussehra and a theatrical trailer was launched today. The impressive trailer has created a lot of interest in the project and the special effects look promising. There seems to be a good amount of supernatural phenomena in the film, going by the visuals that can be seen. The audio album scored by Devi Sri Prasad has already become a big hit.

Damarukam is releasing worldwide on October 11th and Sriinivas Reddy is the director. The movie has Anushka as the heroine opposite Nagarjuna. Firefly has handled the special effects work. The movie has been produced by Dr. Venkat of R.R.Movie Makers with a big budget, said to be in excess of Rs 40 Crores.

With a good music album and an impressive trailer, Damarukam has fully caught the attention of Telugu movie lovers. Let us hope that the film lives up to the expectations.