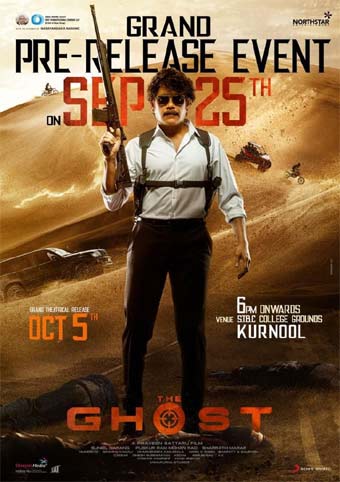 King Nagarjuna who recently mesmerized in Brahmastra is all set to show his power with the upcoming action thriller The Ghost that is directed by Praveen Sattaru. Sonal Chauhan is paired opposite Nag and the film is set for a Dusshera release on October 5th.

The latest news is that the film’s pre-release event will be held on September 25th in Kurnool at STBC college grounds from 6 PM. Already the makers are promoting the film very well as the theatrical trailer and the first single were released.

In the days to come plans are being made to amp up the marketing. Bharath and Saurab duo scored the music and it is produced by Suniel Narang, in association with Puskur Ram Mohan Rao, and Sharrath Marar under Sree Venkateshwara Cinemas LLP and Northstar Entertainment Banners.