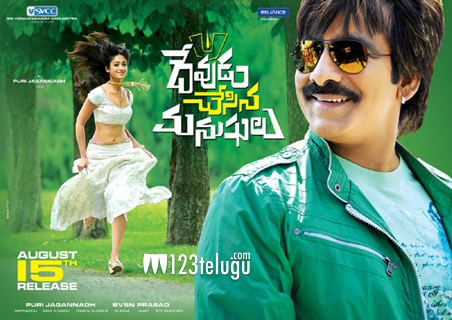 Mass Maharaja Ravi Teja’s ‘Devudu Chesina Manushulu’ has not done too well in East Godavari District on Day 1. The movie’s collection stands at about Rs. 16.40 Lakhs share, which is low by Ravi Teja’s standards. Trade analysts are saying that the film’s long run share in this area might end up at around Rs. 45 Lakhs, which is going to be lower than ‘Nippu’.
The film has released yesterday on the occasion of Independence Day and Puri Jagan is the director. Ileana is the heroine in the movie while BVSN Prasad is the producer. Music has been scored by Raghu Kunche.