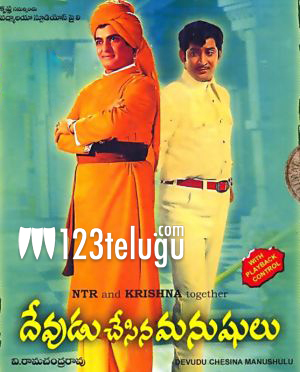 There is heightened curiosity as to how Puri Jagan’s Devudu Chesina Manushalu will shape up. The first movie with this title Devudu Chesina Manushalu was made in 1973 by Padmalaya Studios. It had the titans of the time – NTR & Krishna playing the lead roles. Directed by V Ramachandra Rao the movie went on to become a blockbuster. It had a 175 day run in Vijayawada and Nellore, not to mention a 100-day run in over 16 centres.

Not many are aware that the current Tamilnadu C M Jayalalitha was a heroine in that film. So Puri Jagan’s Ravi Teja starrer has that bit of history going for it. The curiosity factor is why did Puri Jagan chose this title. As is his wont the ace director is confident of wrapping the film up in a 3 month span. So come June we will know the answer.