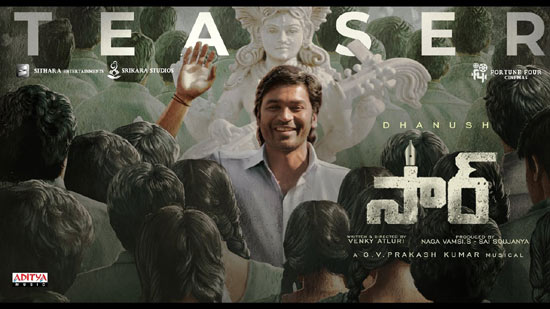 We all know that Kollywood star hero Dhanush is doing a bilingual film Vaathi/Sir. Yesterday the team unveiled the first look from the film in which the actor looked intense. Today marking the actor’s birthday the movie team released the teaser.

Dhanush as Bala Gangadhar Tilak excelled as a junior lecturer in this interesting teaser. His style and mannerisms are perfectly utilized by the director. The fight sequences look good too and are composed stylishly.

The movie deals with the corruption in the educational system and it is set in the 90s backdrop. Dhanush mouths a powerful dialogue about the significance of education and stresses that it shouldn’t be seen from a business perspective. He himself dubbed in the Telugu version too.

Directed by Venky Atluri of Tholi Prema fame, the film has Samyuktha Menon as the love interest of Dhanush. Sithara Entertainments and Fortune Four Cinema are banking this project and it has music by GV Prakash Kumar. The release date will be announced soon.