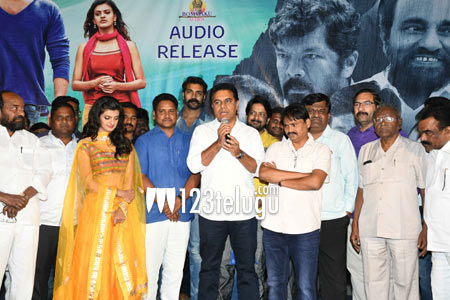 The audio album of the controversial movie Saranam Gachchami was unveiled by Telangana’s Minister of IT KTR last night. Speaking on this occasion, KTR revealed that he was terribly upset when the TRS party suffered a major defeat in 2008. At that point, KTR even thought of quitting politics after merging TRS with Congress.

KTR went on to reveal that it was an inspiring poem penned by Saranam Gachchami’s director Premraj that stopped him from quitting politics and rise like a phoenix. KTR said that it is with that gratitude that he has graced the audio launch event of Premraj’s Saranam Gachchami.

Saranam Gachchami made headlines recently when the censor board refused to grant censor certificate to the film. Saranam Gachchami is based on caste based reservation and it stars Naveen Sanjay and Tanishq Tiwari. Murali is the film’s producer, while Ravi Kalyan has scored the music.