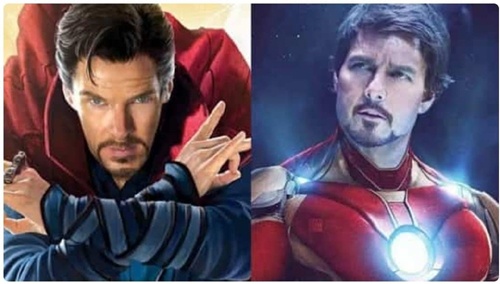 A couple of days ago Marvel released the second trailer of the much-awaited movie, Doctor Strange In the Multiverse Of The Madness. The trailer has impressed the Marvel fans and to our surprise, Marvel also released a brand new poster. Both the trailer and the poster are filled with many easter eggs.

After watching the mind-blowing trailer of the supernatural adventure, Marvel fans have started believing that a frame in the trailer confirms the presence of Tony Stark, not essayed by Robert Downey Jr, but Tom Cruise. A few fans are showing proof that he played Superior Iron Man in the movie. As the title suggests, the Benedict Cumberbatch-starrer Multiverse of Madness, of course, deals with the Multiverse and addresses the ramifications of that fateful spell cast by Doctor Strange in Spider-Man: No Way Home.

Besides, fans have come up with various fan theories. Some also believe that Dead Pool (Ryan Ronalds) is also there in the movie. Ryan has debunked the rumours but fans are saying that he has lied.

Starring Benedict Cumberbatch, Elizabeth Olsen, Chiwetel Ejiofor, Benedict Wong, Xochitl Gomez, Michael Stühlbarg, and Rachel McAdams, the movie is directed by Sam Raimi. Produced by Kevin Feige, Doctor Strange In The Multiverse Of Madness is all set to release in theatres on May 6, 2022, in English, Hindi, Tamil, Telugu, Kannada and Malayalam in India.