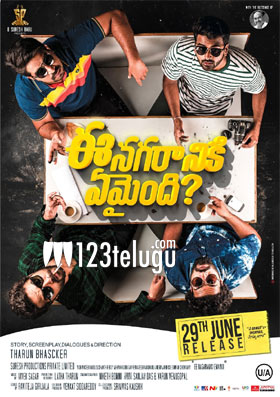 Ee Nagaraniki Emaindi, the latest youthful entertainer from Tharun Bhascker and Suresh Babu, released yesterday to decent reviews. The film’s day one collections in the US and twin Telugu states are encouraging. Lead cast’s performances and fun quotient throughout are the major highlights in the movie.

Ee Nagaraniki Emaindi collected $98,136 from 123 locations from Thursday premieres across the US. On Friday, the film collected another $81,127 from 122 locations, taking the overall day one total to $179,263. While the just released Bollywood biggie, Sanju, may show some impact on ENE’s collections in the US, the film may have a steady run in the twin Telugu states over the weekend.