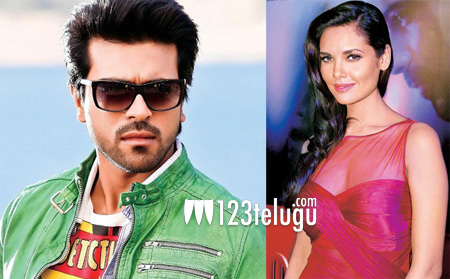 The latest star to join the long list of Ram Charan’s fans is Bollywood siren Eesha Gupta. Although Ram Charan’s attempt at wooing the Bollywood audience proved to be unsuccessful, the actor has earned some fans in Bollywood.

Eesha Gupta is currently acting alongside Tamannah in the soon to release ‘Humshakals’. While promoting the film, the actress was asked if she would act in a South Indian film and the sultry actress revealed that she is a fan of Ram Charan and would love to act alongside him in Telugu while she would prefer acting alongside Suriya in Tamil. Eesha was seen moving around comfortably with Tamanna and when asked about her friendship with Tamanna, she said that Tamanna is a very lovely person and a good friend of hers.