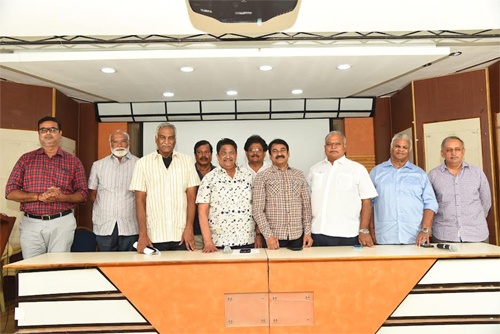 The government of Andhra Pradesh released new ticket prices GO in support of the Telugu Film Industry. On this occasion, the Film Chamber of Commerce has interacted with the media today in Hyderabad.

Kalyan said, “Thanks to YS Jagan garu for putting an end to the issue by releasing new ticket prices GO. Jagan garu wants us to develop the film industry in Vizag. We all will meet him very soon and discuss the same to make it happen. We will also felicitate Jagan and KCR shortly for their enormous support for our industry. Chiranjeevi is our industry’s bigwig as he came forward and neatly solved the issue.”

Tammareddy Bharadwaja also thanked the AP CM for his support for the industry and he wished that CM Jagan should look into the remaining problems of the industry.

“The new GO has put an end to many unsolved issues that have been there for years. Distributors had faced many issues with GO No. 35 than Covid. The new GO satisfies everyone and it would have come before the release of Bheemla Nayak. We will solve the other small problems. We appreciate Chiranjeevi for making this happen so soon,” NV Prasad.

Chadalwada Srinivas commented, “Several best movies are being made in Tollywood and the PM also appreciated them. The industry will be good only if theaters run well. We always need support from Telugu states. Also, we requested the respective governments to allocate lands to establish a film chamber.