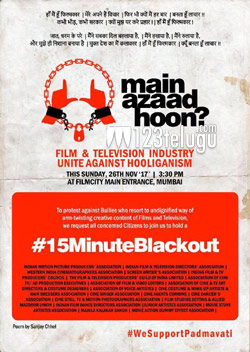 Sanjay Leela Bhansali’s upcoming magnum opus, Padmavati, has been mired in several controversies ever since its inception. There were intense protests against the film right from the shooting days itself. The agitations took an ugly turn when members of a fringe group and several political leaders gave nasty statements, threatening the film’s leading lady Deepika Padukone and Sanjay Leela Bhansali.

Taking a united stand against the hooligansism, the entire Bollywood fraternity is observing 15 minutes of blackout at Mumbai Filmcity at 3:30 pm this afternoon. This unique protest is to fight against the bullies who arm-twist creative content of films and television.