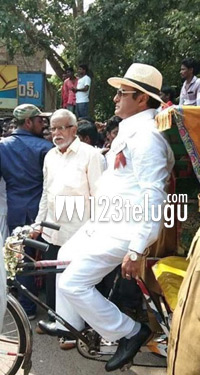 Yesterday, we had reported that Balakrishna is shooting for a key scene featuring the ghastly floods which occurred in AP during 1977.

During those days, superstars NTR and ANR went to places like Divi Seema in Krishna district and raised funds. The same scene is being recreated by Krish now for the biopic.

Fresh visuals of Balyya dressed as NTR and driving a rickshaw to collect funds have gone viral now. Keeravani composes music for this film which has Vidya Balan as the female lead.