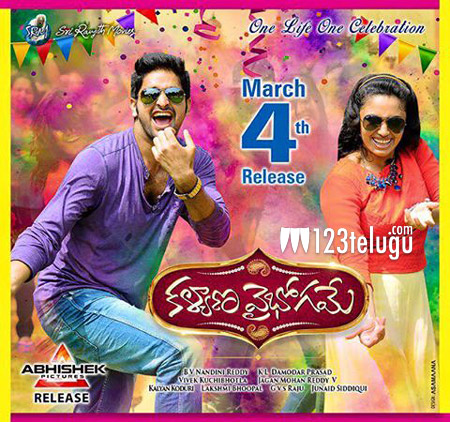 Nandini Reddy’s ‘Kalyana Vaibhogame’, which has Naga Shourya and Malavika in lead roles, is gearing up for a good release this Friday. The movie is carrying a good report in film circles and it is getting a wide release through Abhishek Pictures.

Kalyana Vaibhogame is a coming of age romantic drama which has ‘forced arranged marriages’ as the main theme. Veteran actors Raasi and Aishwarya are playing important roles in this movie.

K. Damodar Prasad is the producer of this movie and Kalyani Malik has composed the music. The film has dialogues from Lakshmi Bhupal. The second trailer of the film was released yesterday, to a good response on social media.