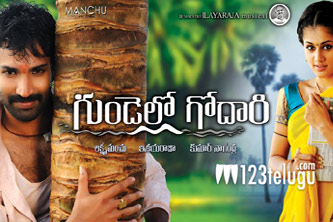 The platinum disc event of Gundello Godaari is going to be held on March 6 in Hyderabad. Dasari Narayana Rao, Mohan Babu, K Raghavendra Rao, Manchu Manoj and the cast of Gundello Godaari is expected to grace the event. The film’s music has been scored by Ilayaraja and the audio was launched a long time ago. Since the film is set in mid 1980s, Ilayaraja has scored music accordingly. For the past few days, the film’s promotions have been on full swing and the film’s lead cast is leaving no stone unturned to promote the film.

Gundello Godaari stars Lakshmi Manchu, Taapsee, Sundeep Kishan and Aadhi in lead roles. Kumar Nagendra has directed the film and Lakshmi Manchu has produced it under Manchu Entertainment banner. The film is based on Godavari Kathalu, a book written by BVS Rama Rao and it narrates the story of four people set in the backdrop of 1986 floods in Godavari region. The film will hits the screens on March 8.