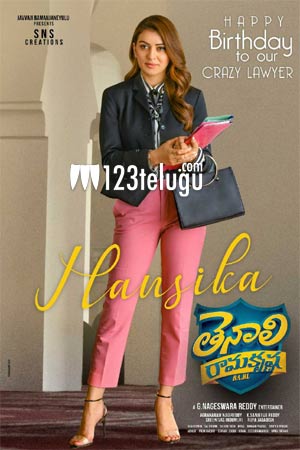 Popular actress Hansika is making a comeback in Tollywood with Sundeep Kishan’s upcoming comedy entertainer, Tenali Ramakrishna BA BL. Hansika celebrates her birthday today. On this occasion, the film’s unit has unveiled a special poster this morning, revealing Hansika’s look in the movie.

Dressed in a black blazer and a pink trouser, Hansika appeared stylish and suave in her lawyer look. The actress is quite excited about the movie and her character. Tenali Ramakrishna BA BL’s shoot has been wrapped up except for the songs. The makers are planning to release the film towards this year end.