Here’s the much-awaited update on Ala Vaikuntapurramulo’s teaser
Published on Dec 9, 2019 10:15 am IST 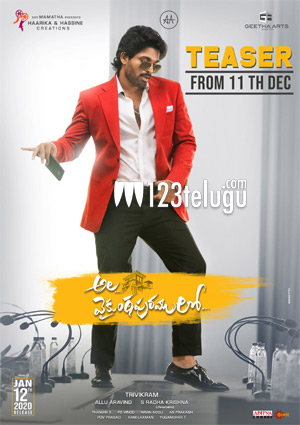 Finally, here comes the much-awaited update on Ala Vaikuntapurramulo’s teaser launch date. The film’s teaser will be out on December 11th. In a special surprise, a small glimpse of the teaser will be unveiled this evening at 4:05 pm.

Ala Vaikuntapurramulo marks the hat-trick collaboration between Allu Arjun and Trivikram, after the successful Julayi and S/o Sathyamurthy. The film is scheduled for a January 12th release, as a Sankranthi festive treat. The film is touted to be a complete family entertainer in Trivikram’s style.

S Radhakrishna is producing the film and Allu Aravind is presenting it. Pooja Hegde, Tabu, Nivetha Pethuraj, Navdeep and Sushanth will be seen in key roles in the movie. Thaman is the film’s music composer.