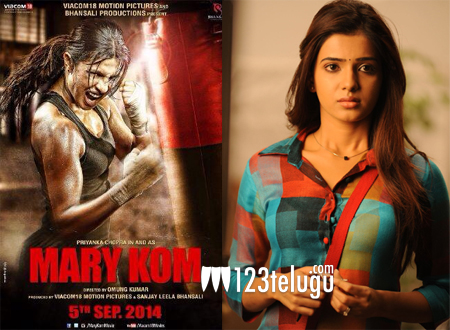 Bollywood super heroine Priyanka Chopra, is getting rave reviews for her hard hitting trailer of ‘Mary Kom’. The first look has going viral, and is getting thumping response all over the country.

Interestingly, this trailer has moved yet another star Samantha so much that, she was in tears after watching it. She expressed her feelings through twitter as she tweeted “Just teared up in public at the airport watching the trailer of Mary Kom. I don’t know why I don’t know how to explain it. But what a feeling.”

Directed by Omung Kapoor, this biopic is based on the real life story of the famous Olympic boxer Mary Kom, and her struggle to become a champion boxer. Sanjay Leela Bansali produces this film, which is slated to hit the screen on September 5.