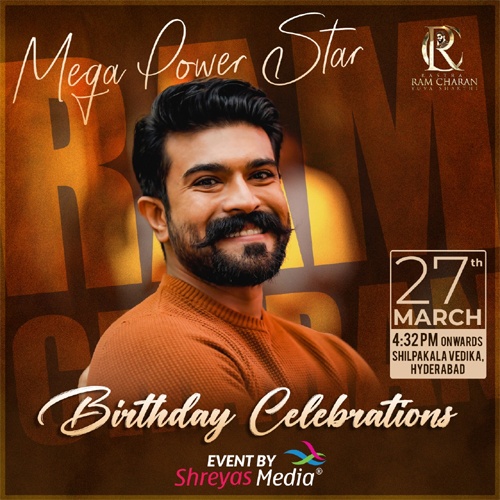 Starting his career as the beloved son of actor Megastar Chiranjeevi, Ram Charan has created his fanbase and became a star hero by doing different roles. The mega actor will be seen next in RRR, directed by SS Rajamouli.

As Charan will turn one more year older on March 27, his fans have planned to celebrate their favourite actor’s birthday in a grand way. As a part of that, Ram Charan Yuva Shakthi has decided to celebrate Ram Charan’s birthday at Shilpakala Vedhika in Hyderabad.

Organised by Shreyas Group, the event will happen in a grand manner from 04:32 PM onwards on March 27, 2022. A huge turnout has been excepted by the organisers on the event day. Keep watching this space for more interesting updates.