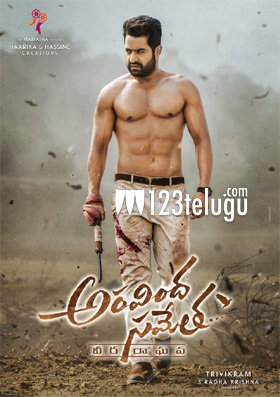 NTR, Trivikram Srinivas’ upcoming film Aravindha Sametha is one of the most eagerly awaited films of the year. Considering that it is the first time that the two biggies are teaming up, expectations are huge on the film.

Now, the makers of the film have revealed that LA Telugu are going to distribute the film in overseas markets. Incidentally, the same banner had distributed Pawan Kalyan, Trivikram’s Agnyaathavaasi in a huge way and they impressed everyone with the utmost care they took with the film’s planning and promotions.

There is no doubt that Aravindha Sametha will see the biggest release for NTR in US and other markets. And given LA Telugu’s strategy and planning, fans of NTR can look forward to massive numbers in US and other areas. Pooja Hegde is the lead actress. Thaman is scoring the music.