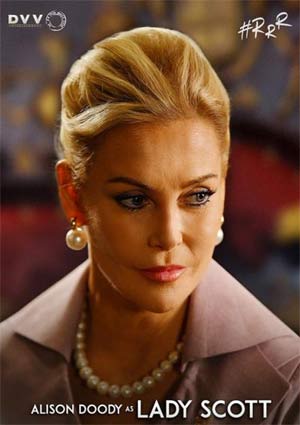 Rajamouli’s ambitious period magnum opus, RRR, featuring NTR and Ram Charan as Komaram Bheem and Alluri Seetharamaraju respectively, is one of the most eagerly awaited Indian movies in 2021. While the makers are tight-lipped about the film’s release date, there have been several speculations on social media that the film could hit screens either on October 8 or January 7.

Meanwhile, Irish actress Alison Doody, who plays a key role in RRR, has made an unwanted error on Instagram. She accidentally revealed that RRR will be released on October 8, confirming the ongoing buzz that the film will be out during the Dasara festive season. Realising her faux pas, Alison quickly deleted her post. However, alert fans promptly took the screenshot of her post and made it viral on social media.

On the other hand, Team RRR is expected to end the suspense surrounding the film’s release date on January 26. This epic period drama is being produced by DVV Danayya with a whopping Rs 400 crore budget. Ajay Devgn, Alia Bhatt, Olivia Morris and Kollywood actor Samuthirakani and others play crucial roles in the movie.