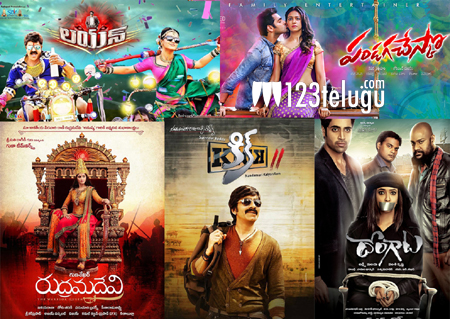 Looks like May will be a busy month ahead for film trade and movie buffs alike, with several high and medium budget films hitting the screens. The May storm has been kick started with the releases of ‘Uttama Villain’ and ‘Ganga’ on May Day. This Friday, Nandamuri Balakrishna’s ‘Lion’ will release big amidst high expectations.

Then comes Lakshmi Manchu’s ‘Dongaata’ on 8th and Sundeep Kishan’s ‘Tiger’, also vying for the same week. And in the second half of the month, several big budget films like Ram’s ‘Pandaga Chesko’, Suriya’s ‘Masss’, Ravi Teja’s ‘Kick 2’ are scheduled to release in a big way. Even Gunasekhar’s highly anticipated ‘Rudhramadevi’ is expected to release
towards the end of May or early June.

With so many releases within a month, one can say that the movie buffs’ thirst will be quenched big time.