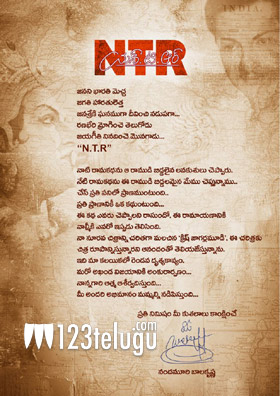 All eyes are on NTR, the prestigious biopic on legendary actor and former chief minister of erstwhile Andhra Pradesh NT Ramarao. After Teja’s exit, speculations were rife about the director who will helm this highly-anticipated movie. NTR’s son Balakrishna will be playing his father in the biopic.
Confirming the ongoing buzz, NTR’s makers have just made an official announcement saying that Krish will be directing this crazy project. Balayya himself made the big revelation in an audio teaser. The announcement comes on the eve of NTR’s 95th birth anniversary.

Nandamuri fans couldn’t be any happier as Krish had given a memorable film in the form of Gautamiputra Satakarni when he joined forces with Balayya for his landmark 100th film last Sankranthi.

NTR will be produced jointly by Balakrishna, Sai Korrapati and Vishnu Induri. Stay tuned for more updates on this exciting project.