Jana Gana Mana song from Major is inspirational and emotional
Published on Jun 2, 2022 10:50 am IST 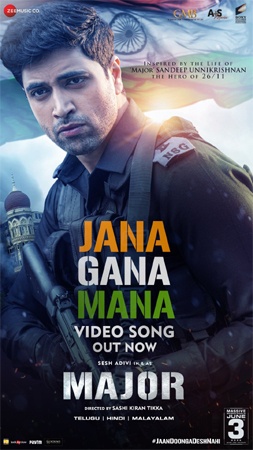 Adivi Sesh-starrer Major is up for a grand release in theaters worldwide tomorrow. Ahead of that, the makers of the movie have released Jana Gana Mana, the third song from the movie.

Crooned by Tojan Toby, the song gives an answer to the question- ‘What is it meant to be a soldier?’ During childhood, Sandeep Unnikrishnan sees the navy’s exercise and that’s the first moment in his life that instigates him to serve the country. It then traces the Braveheart’s journey in the army to his heroics in the tragic incidents in the Mumbai terrorists’ attack. Major’s reply to his dad’s question about a soldier is thought-provoking.

The life journey of Major narrated in this song is very inspiring and emotional at the same time. Composed by Sricharan Pakala, the lyrics of the song are penned by Rajiv Bharadwaj.