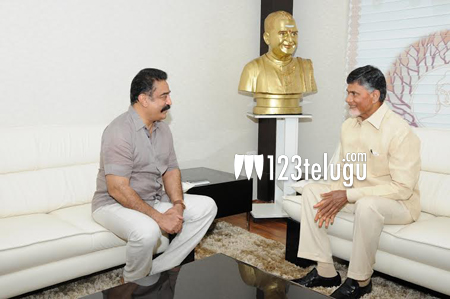 Legendary actor and filmmaker Kamal Haasan met the AP CM Nara Chandrababu Naidu at the CM’s camp office in Vijayawada yesterday. While the meeting had no political angle to it, Kamal later revealed in a statement that he met the CM to seek his permission to hold the premiere of his upcoming film, Cheekati Rajyam, in Vijayawada.

Kamal also invited Chandrababu for the premiere and the CM readily obliged to the actor’s request. Kamal also has plans to hold the premiere in Hyderabad on the same day with a 6-hour gap for the film’s actors to shuttle between Hyderabad and Vijayawada.

Cheekati Rajyam’s Tamil version, ‘Thoongavanam’, was released on the eve of Diwali and garnered positive response from the audiences. The Telugu version will release on 20th November.