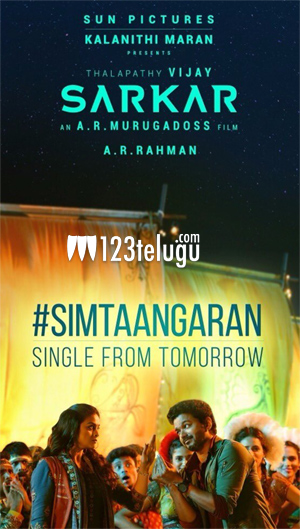 All eyes are on the first single from Thalapathy Vijay and star director AR Murugadoss’ upcoming political thriller, Sarkar. AR Rahman, who had scored a hit soundtrack for Vijay’s previous film Mersal, is the music director for Sarkar.

Sarkar’s first single ‘Simtaangaran’ is scheduled to be released at 6 PM tomorrow. Needless to say, expectations and speculations are quite high and intense about the genre of the song. And Sarkar’s leading lady Keerthy Suresh has made an exciting revelation about the song.

Keerthy took to Twitter and revealed that Simtaangaran is going to be a quintessential AR Rahman folk number. The stage is all set for the Oscar-winning composer to top the music charts from tomorrow.