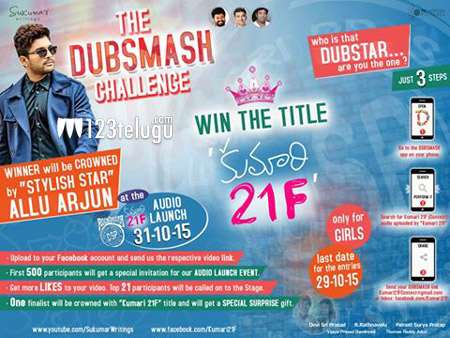 Raj Tarun and Heebah Patel starrer romantic ​entertainer, Kumari 21F, has been the talk of the town ever since Young Tiger NTR unveiled the film’s teaser. Now, to accentuate the hype for the film, the makers have announced “The DUBSMASH Challenge” and the lucky winner will have an opportunity to meet Stylish Star Allu Arjun and also win the “Kumari 21F” title.

The first DUBSMASH Challenge will be held during a huge event called “SENSATIONS” at Andhra University Grounds, Beach Road, Vizag on 18th October at 8 PM. ​To participate in the competition, enthusiastic participant should search for Kumari 21F Contest audio uploaded by the “Kumari 21F” team.

The participants must then upload the video on their Facebook page and email the link to Kumari21FContest@gmail.com or send a message at www.facebook.com/Kumari21F

The first 500 participants will get a special invitation for the film’s audio launch event on 31st October, 2015. 21 participants with more “likes” to their videos will share the stage with stars at the audio launch. One final winner will be crowned with “Kumari 21F” title along with a surprise gift.

Kumar 21F is directed by Surya Pratap Palnati and jointly produced by director Sukumar on his Sukumar Writings and Vijaya Prasad Bandreddi and Thomas Reddy Aduri on their PA Motion Pictures banners. Devi Sri Prasad composed the music for the film.