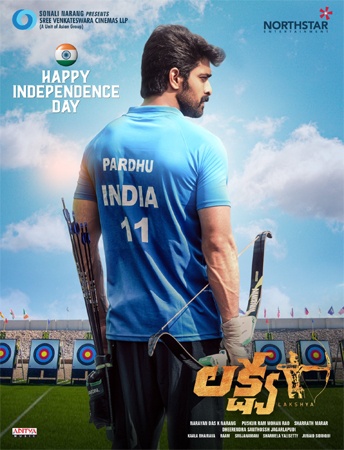 The makers of Naga Shaurya’s upcoming sports drama, Lakshya, unveiled a special poster on the occasion of India’s 75th Independence Day. The poster features Naga Shaurya as an archer. His jersey has his name ‘Pardhu’ and India written on it, hinting that he is representing India on an international level.

Lakshya is touted to be India’s first movie based on the ancient sport of archery. Naga Sahurya will be seen in a never-seen-before look, with a ripped 8-pack body. The film marks his 20th outing in his career. Lakshya also features Jagapathi Babu and Delhi Instagram beauty Ketika Sharma in lead roles.

Lakshya is in the last leg of its shoot, and the post-production work is underway simultaneously. Directed by Dheerendra Santhossh Jagarlapudi, the film is produced by Narayan Das K. Narang, Puskur Ram Mohan Rao, Sharrath Marar in Sri Venkateswara Cinemas LLP, and Northstar Entertainment Pvt Ltd banners. Sonali Narang is the presenter.