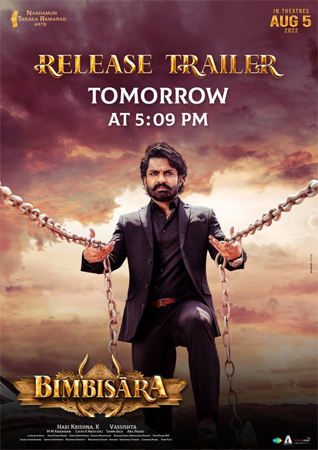 Among the upcoming releases in Telugu, Bimbisara is carrying very good buzz and expectations, thanks to the perfect trailer cut and good songs. Kalyan Ram is looking very confident about the film and is promoting it very aggressively.

The word now is that the second trailer of the film will be unveiled on 27th July at 05:09 PM. Already the movie team has announced that Jr. NTR will be attending the film’s pre-release event. Debutant director Vashist is helming the film.

Produced by Kalyan Ram himself, the film has Catherine Tresa and Samyuktha Menon as the female leads. Chirrantan Bhatt is composing the songs while MM Keeravani is providing the background score. This fantasy action drama will hit the screens on the 5th of August.