Leading ladies of World Famous Lovers to be announced in a special way
Published on Dec 11, 2019 8:01 pm IST 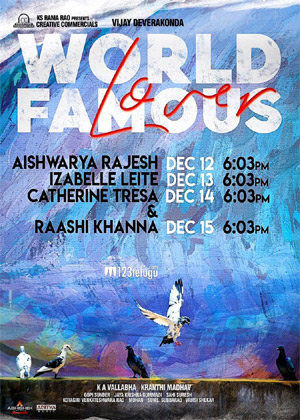 It is a known fact that Vijay Devarakonda is doing a film called World Famous Lover in the direction of Kranthi Madhav. The film’s shoot is also nearing its completion soon.

Now, in a crazy update, the makers have revealed that the various looks of all the heroine will be revealed from the 12th of this month. Catherine Tresa, Raashi Khanna, Aishwarya Rajesh, and Izabelle are playing the female leads in this film.

Vijay Devarakonda will be seen in four different stages of his life in this film which will be out on the 14th of February as valentine’s day special. KS Rama Rao is the producer of the film.