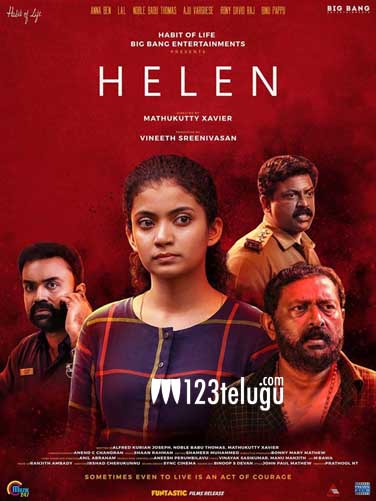 We at 123telugu started a series called Lockdown movie suggestions where we suggest you some unknown films or shows that you need to catch up during this lockdown.

Our suggestion for today is the Malayalam thriller, Helen. This film is on Amazon Prime and has won a lot of hearts already. The film stars Anna Ben and Aju Varghese.

The film is a gritty thriller where a girl named Helen, who works in a fast-food joint gets stuck into the freezer room of the store accidentally. At -18°C, she has to survive in the freezing cold and tries everything to keep herself alive. Helen’s father is clueless about her daughter and starts an investigation with the cops. How she is saved is the whole story.

The performance of Anna Ben is just mindblowing. The way the young actress gets stuck in the freezer and tries various ways to get out surviving the cold has been shown in a very realistic manner. The thrills that keep her locked inside are quite logical and interesting. Also, Helen’s bond with her father is very endearing in the beginning.

This is that kind of a film which the entire family can watch together. Even though it is in Malayalam, the Telugu audience will enjoy it happily as it has quite fewer dialogues and more or thrills. Watch it, you won’t be disappointed.