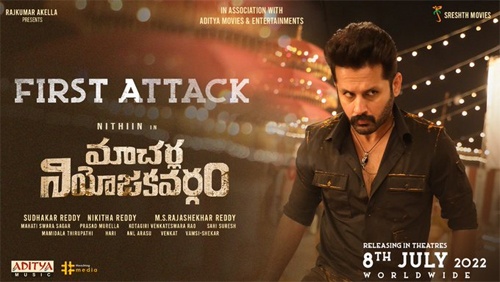 Young and promising actor Nithiin has turned another year older today. On this occasion, the makers of his upcoming movie, Macherla Niyojakavargam, released the teaser of the movie. Noted editor MS Raja Shekhar Reddy has made his directorial debut with this movie.

The teaser showcases Nithiin in action mode. Going by the teaser, it is confirmed that the fight happened during a festival. Nithiin looks powerful in the video glimpse and it’s a feast for his fans to see their favourite hero in an out and out mass avatar. The background score and visuals make the teaser look so good.

Krithi Shetty and Catherine Tresa are roped in to play the female leads in this political action drama. Produced by Sreshth Movies in association with Aditya Movies & Entertainments, the movie, which has Mahati Swara Sagar’s music, is confirmed to release in theaters on July 8, 2022.