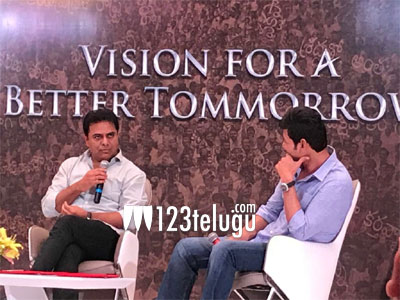 Telangana state minister KTR is a huge movie buff and never leaves an opportunity to watch a good movie and promote it on his Twitter page. Recently, he revealed that he has loved Bharat Ane Nenu and even held an interactive session with the film’s hero Mahesh Babu and director Koratala Siva.

During the session, KTR was all praises for his good friend Mahesh. “Mahesh is an inspiration not just to the youngsters, but many people across the country. Despite being a Superstar himself, he has always been so grounded, so rooted and so real. I really wish he remains the same forever, mentally and physically,” KTR said.

KTR also appreciated Koratala Siva for effectively portraying the four arms of democracy in the movie.