Many friends in my circle loved Romantic: Vijay Deverakonda
Published on Oct 23, 2021 2:00 am IST 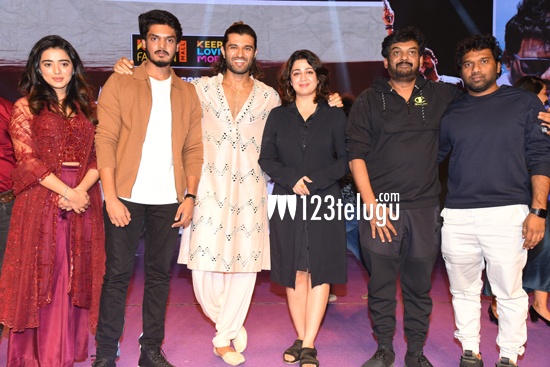 Hero Vijay Deverakonda was a special guest at the pre-release event of his Liger director Puri Jagannadh’s upcoming production, Romantic. The event was held tonight in Warangal. Speaking on the occasion, Vijay had some nice things to say about Romantic.

Vijay said that he has been hearing a superb feedback about Romantic from many of his friends who watched the movie in a special preview and loved it. Vijay wished the film’s hero and Puri’s son Akash Puri and heroine Ketika Sharma a bright future. “I’m very close to Romantic team, as many of them are working on Liger as well. Romantic’s director Anil Paduri is overseeing Liger’s VFX,” said Vijay.

Vijay concluded his speech, making a promise to his Warangal fans that Liger’s team will return to their city for the film’s promotional event. He went on to say that he didn’t talk much about Liger because the teaser and trailer will speak for themselves. “We will shake the entire country in 2022. Aag Lagadenge,” the heartthrob, leaving his fans thrilled.